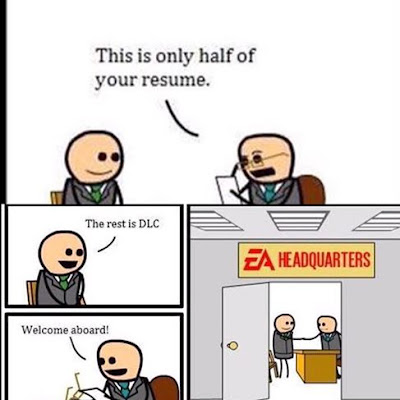 In this humorous comic, two people are sitting across from eachother. The person on the right examines the other’s résumé noticing that he has only brought the first half to his job interview. The interviewee replies that ”the rest is DLC,“ to which the interviewer responds enthusiastically by welcoming him aboard. In the last panel it is revealed they are at “EA Headquarters.”

Email ThisBlogThis!Share to TwitterShare to FacebookShare to Pinterest
Labels: humor

Aside from the fact that a lot of commands in video games can only be invoked through the keyboard, I feel pretty confident in asserting that no matter your level of dexterity with the mouse, learning those commands, mastering the precise series of physical movements it takes to get them into the computer to the extent said movements become , will always be faster than their mouse equivalent counterparts.

I should not have to mention how substantial the premium is that is placed on speed and agility in the world of video gaming. I’m sure anyone who plays computer games, or any other kind of game for that matter, has seen many a contest decided by a seemingly infinitesimal amount of . It’s not too far-fetched to think attaining this kind of virtuosity could be of great benefit outside of the world of computerized games.

In that spirit I provide visitors with handy tables of for our game guides, when applicable. Here are some game guides with a considerable number of keyboard commands:

Anyway, I was adding commands to when I noticed that I had surpassed 500 of them. Of course I could not help but think of how MePlayGameNow.com had developed so far, and to wonder where it will be when I pass 1,000 entered.

Anyways, the next time you are playing a game on your computer and you wonder what the keyboard shortcuts are, I hope you’ll check MePlayGameNow.com first.

Email ThisBlogThis!Share to TwitterShare to FacebookShare to Pinterest
Labels: meta

, a new massively-multiplayer online game backed by one of the biggest names in science, , is coming down the homestretch of its campaign with almost a hundred thousand United States Dollars remaining to raise.

was able to bring Tyson on board after convincing him the title would be well-balanced between fun and education and that it would appeal to space enthusiasts of all ages. Among Tyson’s contributions is helping to make the game as realistic as possible. One way of doing that has been to design solar systems within the game based on real science and after real solar systems. Other would-be world builders include , , and . In addition, Tyson has been able to get large aerospace firms to consult on technologies that, while still fictional, are realistic enough to be plausible for use by the player in-game.

The game promises to be somewhat like or in that players create and grow their own civilizations. Space Odyssey will start, however, where most of these games end as these societies will be to begin with and will survive and hopefully thrive through the wise acquisition and thoughtful use of the natural resources of the celestial bodies (, , , etc.) available in the parts of the galaxies in which they originally spawn.

I think it is so important for anyone who has the means to make a financial contribution to this application, which has such a great potential to educate and entertain and is endorsed by one of the world’s top scientists, to do so. I am so emphatic about this because we all must do our part to slow humanity’s slide down the slippery slope into . It costs only US$10 for the smallest contribution. I realize for many that is too much, but even if you are unable contribute money you can still support the cause by liking the , following the Kickstarter campaign, and involving yourself in the discussions that will help shape this project.

No matter what fate on Kickstarter, I am confident that it will not only materialize into something but that it will be something great. I am very excited about its future and we here at will be on the edge of our seats watching!

Posted by Rodney Lewis at 6:46 AM No comments:

Welcome to My Gaming Blog!

I enjoy playing video games by myself alright but find sharing my experiences with others to be a lot more fun.  This blog supplements MePlayGameNow.com, my PC gaming website.  My favorite games are those like Orbiter, BeamNG.drive, and Microsoft Flight Simulator X: Steam Edition where the makers strive to create realistic simulations.  Some of these aren't even technically games.  Lots of games take place in space or involve driving a car around but most of these put accessible gameplay for the lowest common denominator player at a much higher premium than creating an ultra-realistic experience for the user.

I look forward to walking through my gaming experiences with you.  While some of the titles I choose to write about are playable on mobile devices, and some are ported to video game consoles, my focus is on games that can be played on a desktop computer (Windows, Mac or Linux) as I find this is where the serious, hardcore gamer is. I am excited about making more illuminating help and how-tos whenever I find the existent documentation for a title wanting.

As computers continue to improve, games and simulations will no doubt offer ever more compelling and thrilling journeys for us to embark on.  I hope you will let me share some of these wonderful experiences with you.
Posted by Rodney Lewis at 3:50 AM 2 comments: